It is with great sadness and a heavy heart that I write this blog about Mikey - a great person and humanitarian. 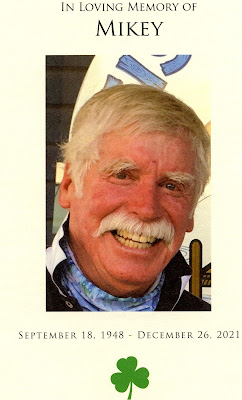 I have known Mike for over 20 years from the Cottage Park Yacht Club. He was always a silver haired fox!  Mike was kind, generous, and had a very engaging personality. His wife Betsy is also a very special person and I am very fortunate to have known both.

Mike was a great sailor and had a Rhodes 19 named Red Dog. He was so very excited for me when I bought Mimi, my Rhodes 19. He sailed her with me from Crystal Cove to CPYC on her maiden voyage. We quickly realized she had a leak - a leaky "O" ring and he had her hoisted out of the water and helped me replace the part. At the end of the sailing season, he either helped me deliver her back to Crystal Cove, or he grabbed one of his buddies and took her over there for me. I have no idea what I will do without him to bounce a few questions or ask for some advice on sailing techniques. He was always happy to help. What a man.

In addition to being an accomplished sailor, he had many accomplishments. His best was serving as a volunteer "kitchen boy" at Camp Fatima in Gilmarton Ironworks NH. He had done that for 55 years. Amazing.

Today was his funeral Mass and burial. The Church was full, and it was the most beautiful Mass I have attended. It was a high Mass, complete with organ music, a soloist, and lots of incense. I always thought Christmas time would be nice for a wedding, it also is a nice time for a funeral with all of the decorations and lights! I am sure Mike would agree.

The funeral Mass was concelebrated by his brother Father Tim and three other priests. I don't know his brother could do it. It was a really emotional service. 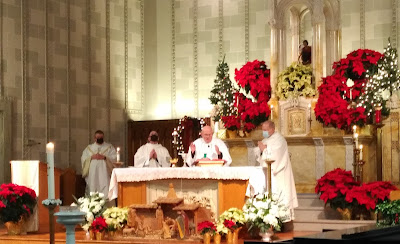 The organ at St. John the Evangelist Church in Winthrop, MA. The soloist had a beautiful voice and fitting for the occasion. 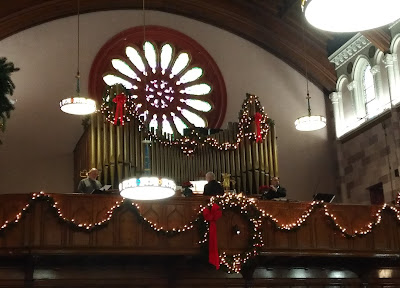 A prayer service at the burial site in Medford. Father Tim is wearing the white cassock. 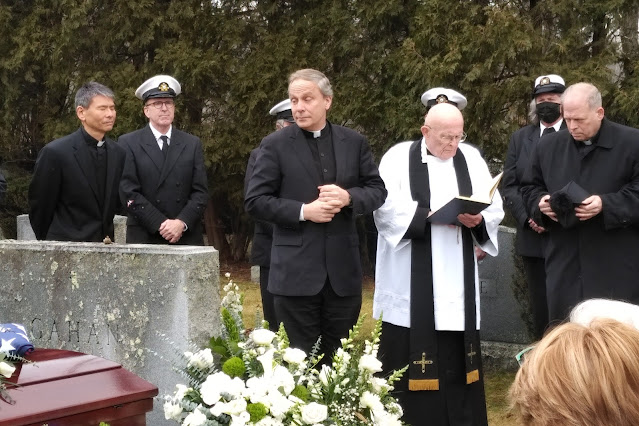 It would not be an Irish funeral without the bagpipes. 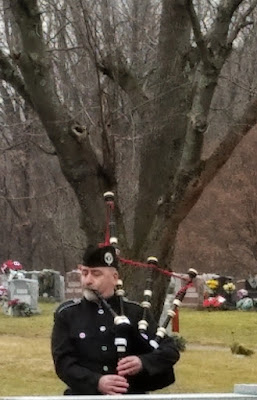 Mike had a great sense of humor. These letters were inserted into the service booklet. 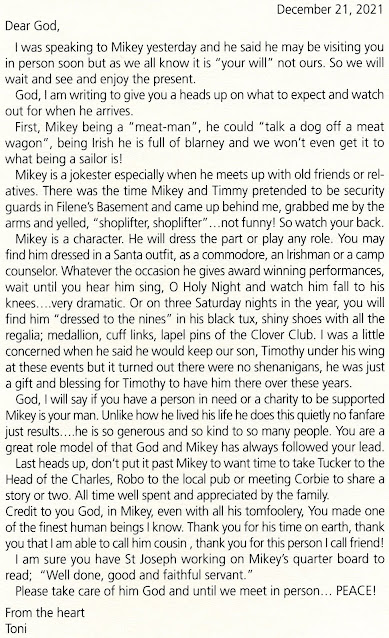 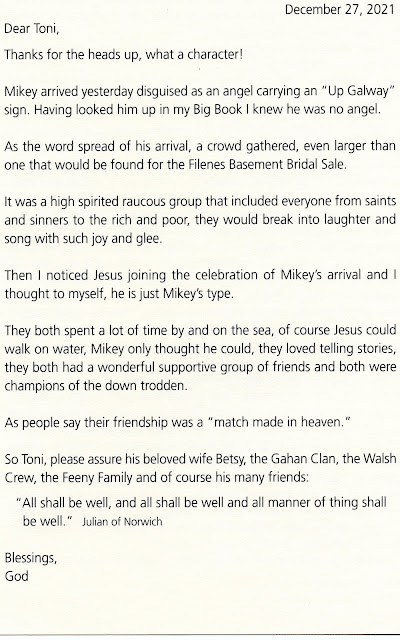 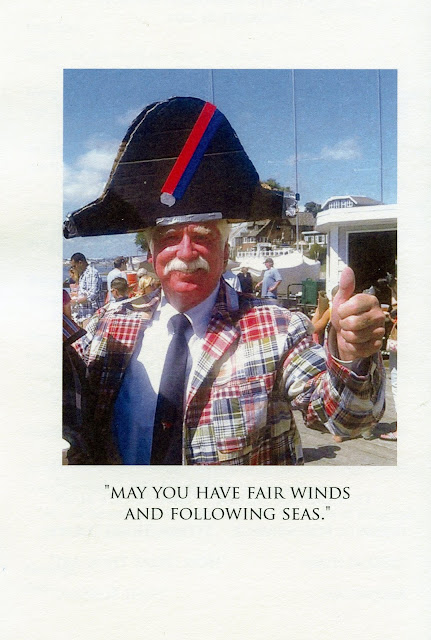 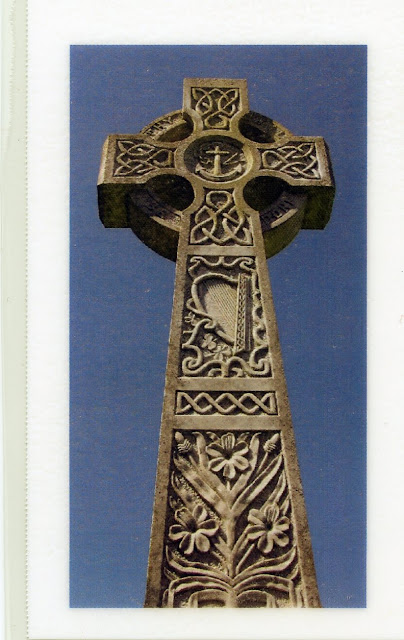 I'll find a few of my pictures with Mike on Red Dog and post later.
God Bless you Mike and may you rest in eternal peace. You will be sorely missed. I miss you already as I type through my tears. And may God keep a close eye on Betsy, your loving wife, and keep her safe and healthy.
.

For pictures of Fionnegan and Gunnarr and Shorty opening their Christmas presents, please visit Shorty's blog. There are lots of pictures of them in their super dog capes and opening presents of treats!

Is that your Dog?   https://mydogshorty.blogspot.com/ 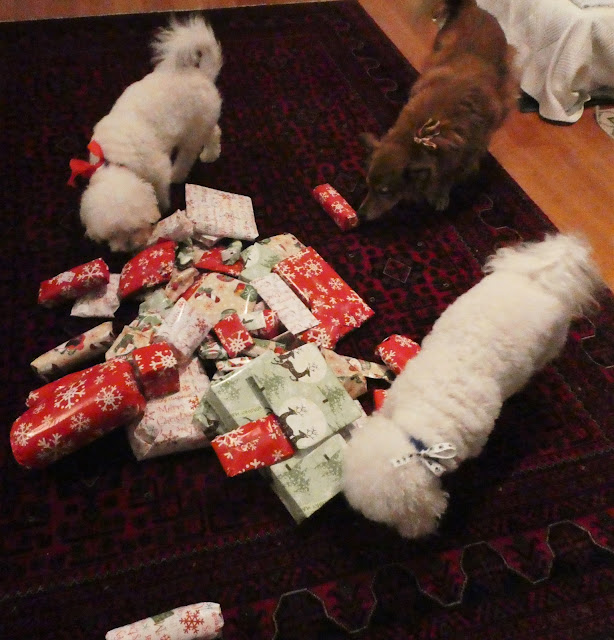 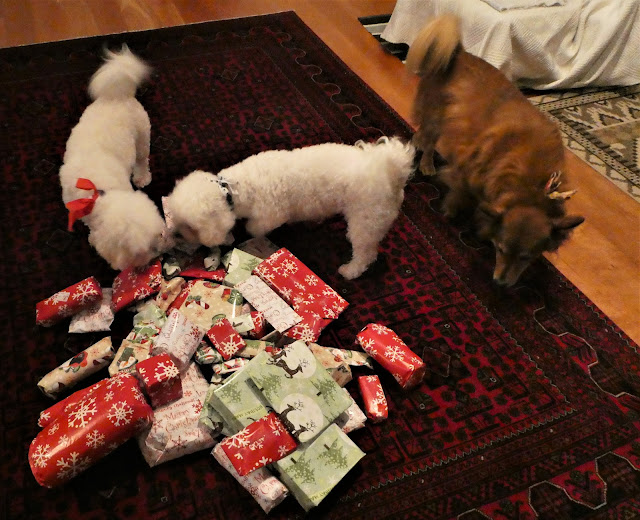 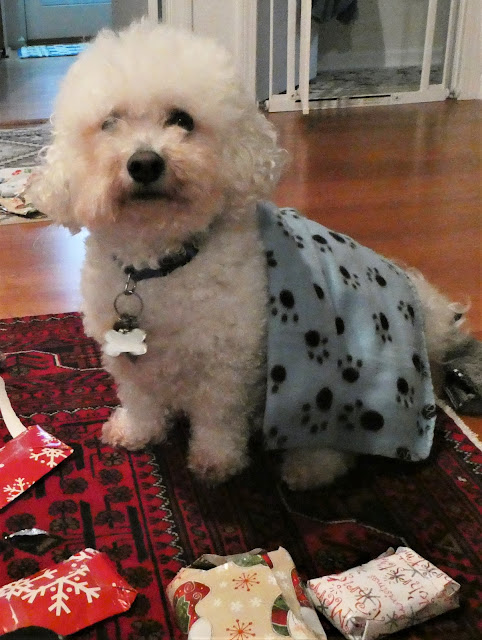 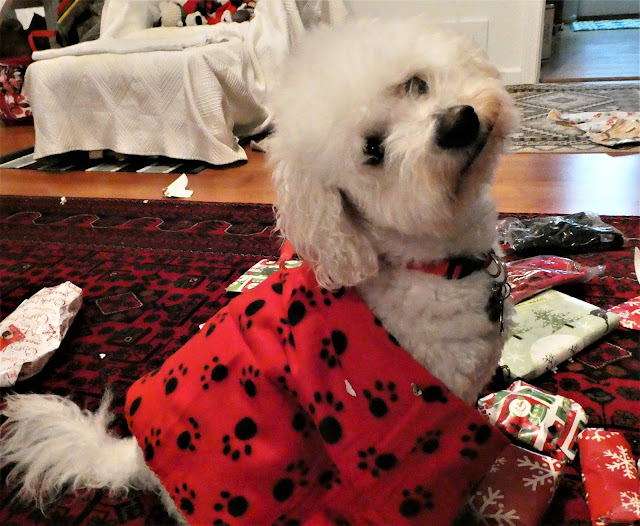 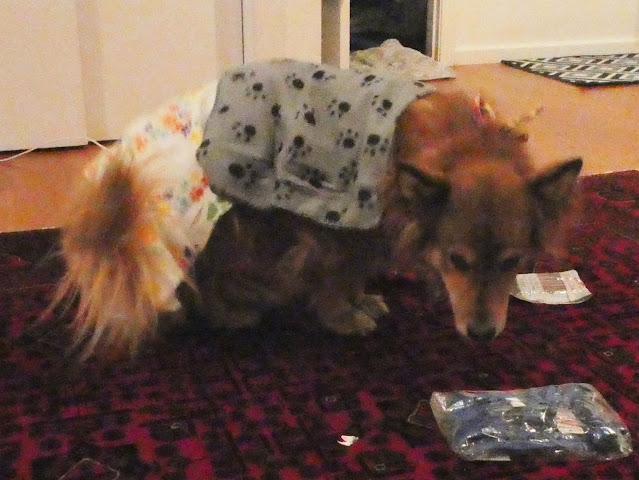 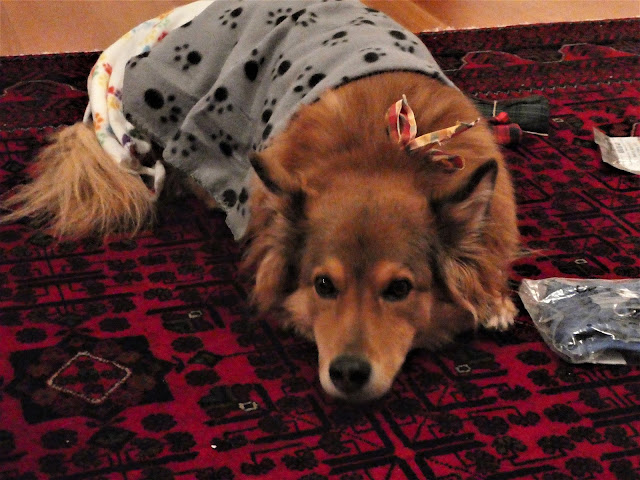 ...... from my family to yours. May you all enjoy the blessings of this holy season. May you enjoy good health and be safe.

Christmas Eve is truly my favorite night of the year. It is magical. I enjoy attending Christmas Mass and the anticipation of a peaceful Christmas Day. 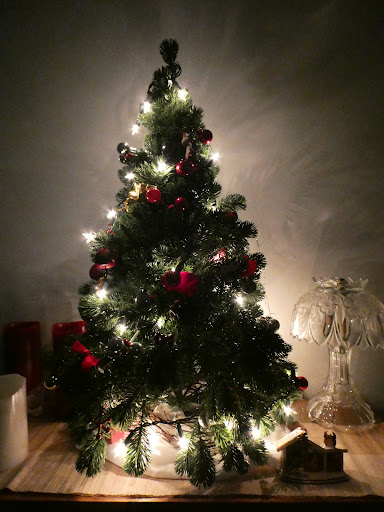 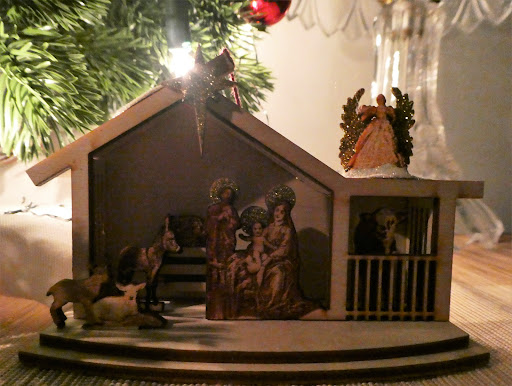 The boys had a very exciting morning with lots of presents from their Auntie Diane. It must have taken hours for her to wrap all of those little gifts - which they had fun unwrapping. Once I get a chance to edit photographs will share a few pictures with you. 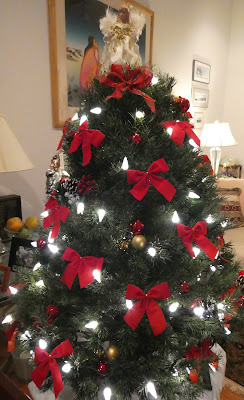 A gate is placed around the tree as it is real and it fragrant. 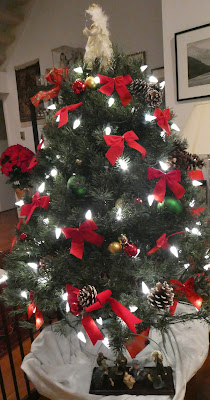 What we all should do after opening Christmas presents and having a few early morning treats - take a nap!

This was quite the afternoon. Had gone to Rockport, a lovely town on Cape Ann and a favorite of mine - as well as probably a million people over the course of a summer. But winter is a particularly nice time to visit as it is not crowded, and I can always find my favorite parking spot.

The reason for this visit was to hear the Back Bay Bell Ringers, a handbell ensemble based in Boston. They perform Christmas music at several local venues and this was a great opportunity to hear them.  They were performing at the Shalin Liu auditorium in Rockport, a very small but beautiful auditorium with a magnificent view of the sea. (see backbayringers.org for more information).

We had great seats - balcony near the center. At times it was a tough decision - watch the performers or watch the seagulls and terns and ducks flying past the window. It was a little mesmerizing to listen to the Christmas music and watch the waves roll into the shore. A beautiful Sunday afternoon, indeed. I really enjoyed the talented musicians and learned something new and exciting about bell ringing - different types of bells and instruments.  The brass bells are made in Pennsylvania and the aluminum bells (lighter weight) are made in London.

Shalin Liu Auditorium. Everyone had to show proof of covid vaccinations and masks were mandatory. 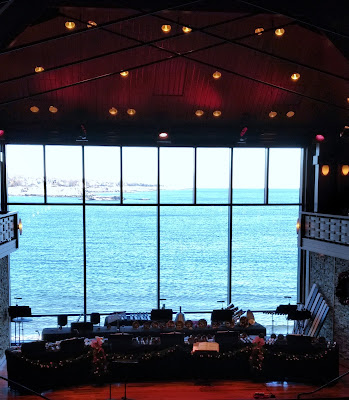 The iconic barn with lobster buoys and a Christmas wreath. 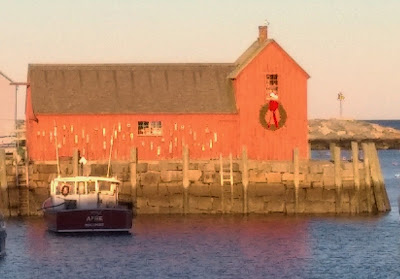 A flock of seagulls and a copy of ducks floating on the water. I like to watch the diving ducks - the water is cold and they do not stay under long! 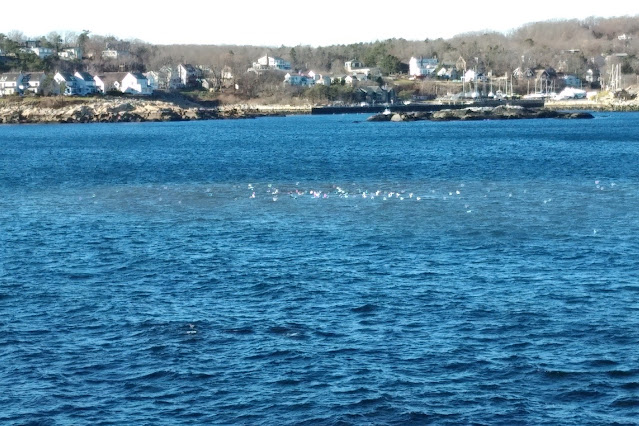 It was relaxing to visit this little town on the water. It was a bit windy but not too cold and the sun was shining which takes off some of the chill. 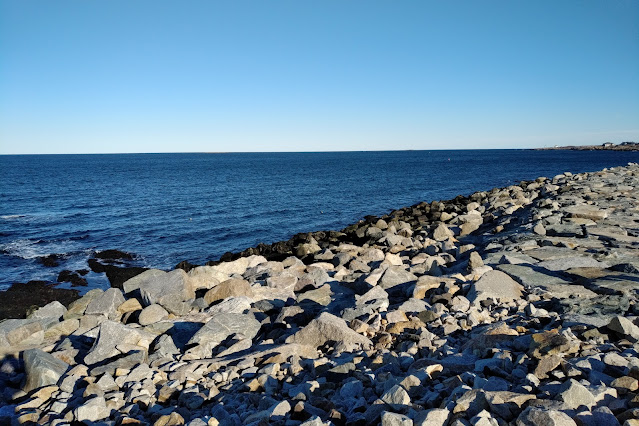 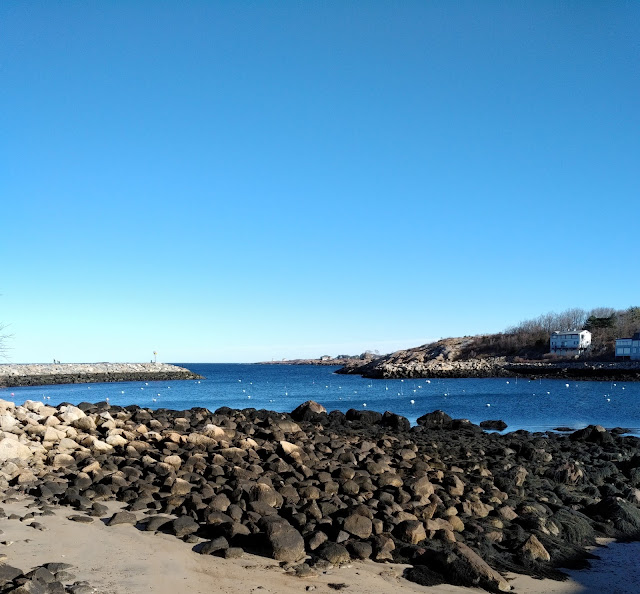 We are all getting busy for Christmas. The real tree is in the living room and protected so my boys don't get any ideas. And we have an artificial tree upstairs because I like the lights at night, and I did a little decorating outside with some blue and white lights on a small tree and the handrails of the porches. Looks nice at night. Also did some baking today and we will watch our favorite Tom Brady play football later tonight. It snowed yesterday so we are all in the Christmas spirit!

A floral arrangement that included a white (carnations) doggy that look just like two of mine! 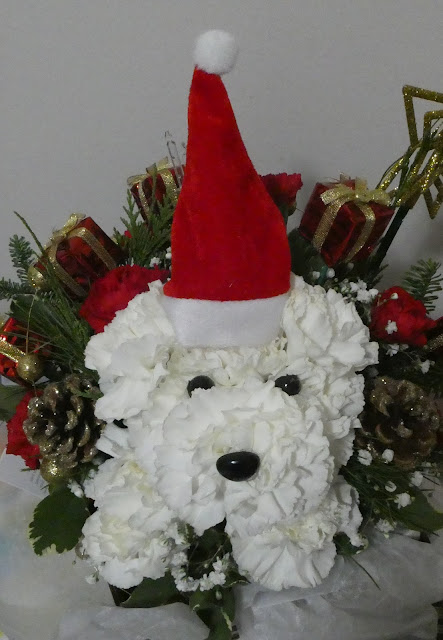 Hope you all are well and healthy and that you will enjoy this very special Christmas season.

My big helpers in the kitchen - Shorty and Fionnegan and Gunnarr. All tails are a wagging! 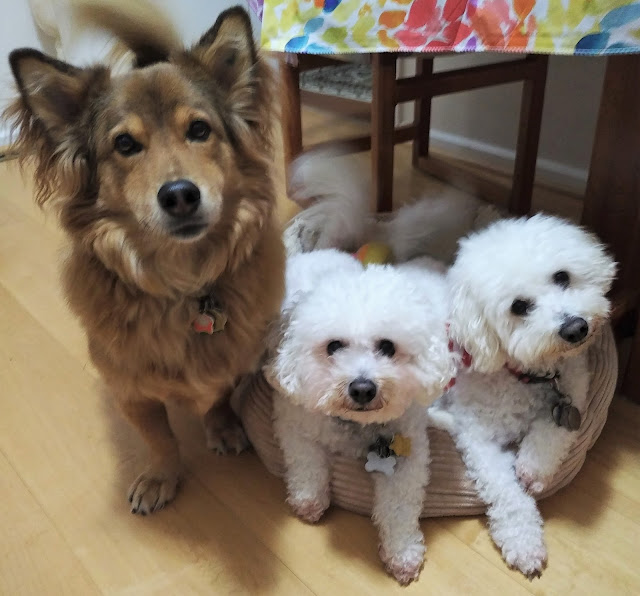